It’s been some time since we delved into the priceless treasures contained in W. McGonagall’s poetry. Today our protagonist has been banned from performing in the Royal Circus in Dundee, and he is most unimpressed. He is so put out at being treated in such an unfair manner that he’s had enough, and is going somewhere he’ll be appreciated. Hrumph.

Lines in Protest to the Dundee Magistrates 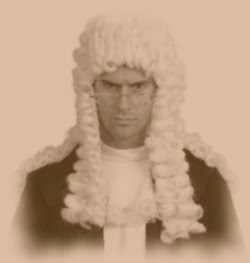 Are ye aware how the magistrates have treated me?
Nay, do not stare or make a fuss
When I tell ye they have boycotted me from appearing in Royal Circus,
Which in my opinion is a great shame,
And a dishonour to the city’s name.

Fellow citizens, I consider such treatment to be very hard;
‘Tis proof for me they have little regard;
Or else in the circumstances they would have seen to my protection;
Then that would have been a proof of their affection,
And how Genius ought to be rewarded,
But instead my Genius has been disregarded
Why should the magistrates try and punish me in such a cruel form?
I never heard the like since I was born.
Fellow citizens, they have taken from me a part of my living
And as Christians they should have been giving;
But instead of that they have prevented Baron Ziegler from engaging me,
Which certainly is a disgrace to Bonnie Dundee.

Who was’t that immortalised the old and the new railway bridges of the Silvery Tay?
Also the inauguration of the Hill of Balgay?
Likewise the Silvery Tay rolling on its way?
And the Newport Railway?
Besides the Dundee Volunteers?
Which met with their approbation and hearty cheers.
And has it come to this in Bonnie Dundee?
But, fellow-citizens, I will not submit to such an indignity
For I am resolved to leave the city
And bid the city a long farewell,
For I cannot get protection in it to dwell,
Therefore I’m resolved from it to flee
For a prophet has no honour in his own country,
And try to live in some other town
Where the magistrates won’t boycott me or try to keep me down

No more shall the roughs of Bonnie Dundee
Get the chance of insulting or throwing missiles at me
For I’m going off to the beautiful west
To the fair city of Glasgow that I like the best,
Where the River Clyde rolls on to the sea,
And the lark and the blackbird whistles with glee.
And your beautiful bridges across the River Clyde,
And on your bonnie banks I’m going to reside.