Mondays With McGonagall: The Battle of El-Teb 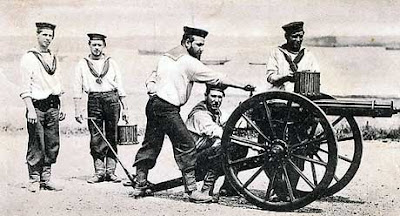 This week, we’re looking at our poet’s take on the second Battle of El-Teb. It doesn’t seem to be a particularly important battle on the world stage (particularly for the residents of Dundee, or indeed anywhere), but thanks to his efforts, we can learn about it in a form other than prose…

Ye sons of Great Britain, I think no shame
To write in praise of brave General Graham!
Whose name will be handed down to posterity without any stigma,
Because, at the battle of El-Teb, he defeated Osman Digna.

With an army about five thousand strong,
To El-Teb, in the year 1884, he marched along,
And bivouacked there for the night;
While around their fires they only thought of the coming fight.

They kept up their fires all the long night,
Which made the encampment appear weird-like to the sight;
While the men were completely soaked with the rain,
But the brave heroes disdained to complain.

The brave heroes were glad when daylight did appear,
And when the reveille was sounded, they gave a hearty cheer
And their fires were piled up higher again,
Then they tried to dry their clothes that were soaked with the rain.

Then breakfast was taken about eight o’clock,
And when over, each man stood in the ranks as firm as a rock,
And every man seemed to be on his guard –
All silent and ready to move forward.

The first movement was a short one from where they lay –
Then they began to advance towards El-Teb without dismay,
And showed that all was in order for the fray,
While every man’s heart seemed to feel light and gay.

The enemy’s position could be seen in the distance far away
But the brave heroes marched on without delay –
Whilst the enemy’s banners floated in the air,
And dark swarms of men were scattered near by there.

Their force was a large one – its front extended over a mile,
And all along the line their guns were all in file;
But as the British advanced, they disappeared,
While our brave kilty lads loudly cheered.

Thus slowly and cautiously brave General Graham proceeded
And to save his men from slaughter, great caution was needed,
Because Osman Digna’s force was about ten thousand strong;
But he said, Come on, my brave lads, we’ll conquer them ere long!

It was about ten o’clock when they came near the enemy’s lines,
And on the morning air could be heard the cheerful chimes
Corning from the pipes of the gallant Black Watch,
Which every ear in the British force was eager to catch.

Then they passed by the enemy about mid-day,
While every Arab seemed to have his gun ready for the fray
When a bullet strikes down General Baker by the way,
But he is soon in the saddle again without delay,

And ready for any service that he could perform;
Whilst the bullets fell around them in a perfect storm
That they had to lie down, but not through fear,
Because the enemy was about 800 yards on their left rear.

Then General Graham addressed his men,
And said, If they won’t attack us, we must attack them,
So start to your feet, my lads, and never fear,
And strike up your bagpipes, and give a loud cheer.

So they leapt to their feet, and gave a loud cheer,
While the Arabs swept down upon them without the least fear,
And put aside their rifles, and grasped their spears;
Whilst the British bullets in front of them the earth uptears.

Then the British charged them with their cold steel,
Which made the Arabs backward for to reel;
But they dashed forward again on their ranks without dismay,
But before the terrible fire of their musketry they were swept away.

Oh, God of Heaven! it was a terrible sight
To see, and hear the Arabs shouting with all their might
A fearful oath when they got an inch of cold steel,
Which forced them backwards again and made them reel.

By two o’clock they were fairly beat,
And Osman Digna, the false prophet, was forced to retreat
After three hours of an incessant fight;
But Heaven, ‘tis said, defends the right.

And I think he ought to be ashamed of himself;
For I consider he has acted the part of a silly elf,
By thinking to conquer the armies of the Lord
With his foolish and benighted rebel horde.

Lorelei
Political correctness aside, this relic is a jewel in the glorious art of story-tell. Bivouack in peace, McGonagall; what’s a fatwa to a dead poet…
mcgonagall, poetry